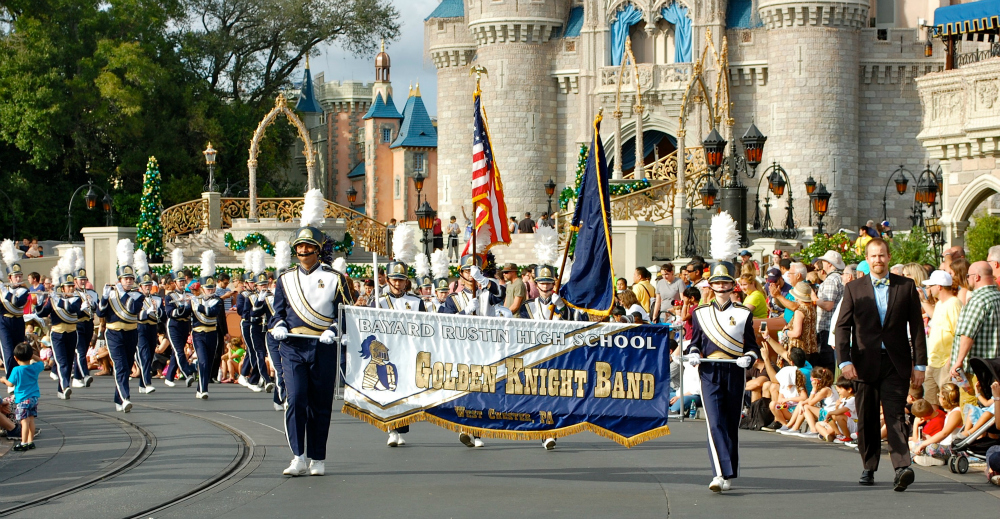 Mike Shoremount, Rustin High School Marching Band Director, received an invitation to apply for the parade performance in September of 2014. The band immediately began creating and submitting videos of their field and parade performances. They were excited to learn they had been accepted to play, and even more excited when they learned that they would be leading the Citrus Bowl Parade.

Multiple fundraising efforts took place in an effort to help offset the cost of travelling to Florida. Students volunteered their time to help at events such as Rustin’s marching band competition, indoor competition, and Jazz festival, as well as sold discount coupons and various gift cards. The Rustin Band Boosters also played a big role in financially supporting the band members.

In preparation for the big performances, band members put a lot of time and effort into memorizing and learning the new repertoire. “I probably spent an average of five hours a week practicing Stars and Stripes Forever in the weeks leading up to the trip,” said Ruben Verhagen, a junior and brass captain. Haley Bostic, a senior drum major, noted, “I worked with students during their lunches and study halls, trying to learn and memorize the music. There was a lot of time spent in and out of school in order to learn the march.”

The Rustin Marching Band also performed at Disney World while they were in Florida. This called for new repertoire and videos for submission. Luckily, the band members were able to perform familiar repertoire – songs that were performed at the West Chester Old Fashioned Christmas Parade. As drum major, Bostic had a unique challenge she had to overcome; “I had to become familiar with conducting the band backwards, something I have never done, and it was quite the physical experience.”

Despite the hard work and nerves leading up to the performances, the band did a phenomenal job and really enjoyed their time in Florida. As the trip came to a close, band members had created stronger friendships, took even more pride in their musicianship, and were genuinely thankful for the experience and opportunity provided to them.

“The students had a once in a lifetime experience performing in front of an international live and television audience for the Citrus Bowl Parade, in addition to the more than 80,000 spectators at the Magic Kingdom,” said Shoremount. “The students have really become a family over the course of the season, and it was an incredible opportunity for them to travel with their friends, perform their very best, and have fun in the Disney parks.”

When asked if she would go on this trip again, Bostic said, “Of course! There’s no doubt about it. Music takes us to places that we can’t even begin to describe. If given the opportunity to take this trip again, I would sign up in a heartbeat. For me, it truly was the opportunity of a lifetime. I was with my fellow peers who have the same love of music that I do. I was doing what I love and live for with fellow students, my peers, my friends, my band. I was doing what I love with my family.”