East High School Unites for HER

East High School Unites for HER 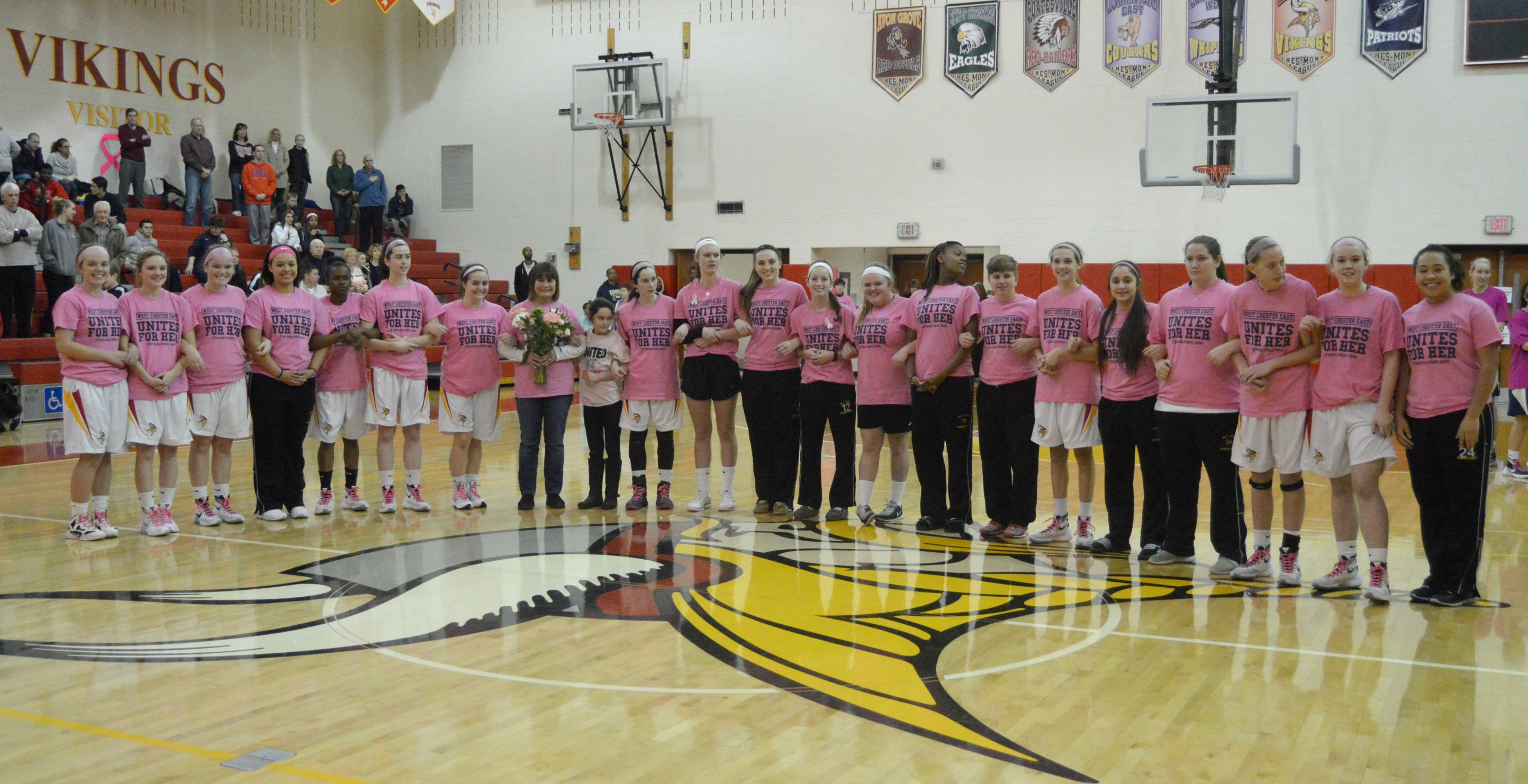 East High School’s Girls Basketball sets goals for their team to achieve each year beyond the basketball court. This year, the team wanted to sponsor a fundraising event that could bring the community together towards a common goal – the following describes how they accomplished exactly that.

“My assistant coaches and I are passionate about signifying to the team that our program is more than just basketball,” said Erin Listrani, the East High School Girls Basketball Coach. “Our students can accomplish anything, both on and off the court, when they work together.” Together, the team decided they would coordinate a Pink Game during their upcoming double header against Bayard Rustin High School. All proceeds from their supporting fundraising efforts would then be directed towards Unite for HER.

Unite for HER was established in 2009 and exists to make a positive difference in the lives of women and girls by supporting and providing breast cancer and wellness programs that educate, empower, and restore. Sue Weldon, the founder of Unite for HER, was diagnosed with breast cancer in 2004. While undergoing the associated medical treatments, she searched for information on therapies that would complement the treatments – Weldon found there was a lack of easily accessible resources on topics like nutrition, acupuncture, massage, yoga, counseling, and other ways for breast cancer patients to enhance their wellness while caring for their emotional, spiritual, and physical needs. Weldon decided to create the non-profit Unite for HER organization to help bridge that gap for breast cancer patients while focusing on wellness initiatives that positively impact their health as well as the health of all women and girls.

Weldon brought the mission of Unite for HER to East High School’s Girls Basketball Team, speaking to the student athletes after one of their practices. “I learned so much about the little things that I can change in my life to help live a healthier life,” said Caitlin Culbertson, the captain of the East High School Girls Basketball Team. “I enjoyed hearing about how Unite for HER makes a difference throughout the community, and how our Pink Game will help them help cancer fighters.”

The Pink Game was held on a Saturday in late January, and it was a part of a unique double-header against Bayard Rustin High School. Both the girls and boys varsity and junior varsity teams from each school played each other. Students from both schools sported pink shoelaces, pink sweatbands, and pink hair ties in support. Special game programs were distributed that included cancer facts, prevention material, and Unite for Her information. The gym and lobby area was decked out in pink streamers, pink table cloths, pink signs, and pink decorations. The lobby also featured a large sign that asked attendees to write the name of a personal connection they had with someone who had been affected by breast cancer – the sign was filled with names before the final game even began. Proceeds from food sales, a 50/50 raffle, a half-time shootout, and apparel were donated to Unite for HER as part of the effort.

Beth Ann Carozza, an East High School teacher and swim coach who is currently undergoing medical treatments for breast cancer, was specially recognized on center court before the girls varsity game began. “Beth Ann is a special part of the East family, and we were honored to recognize and support her during her fight,” said Listrani. “Anytime you can make a connection to someone you know that will benefit from your fundraiser, it makes everything even more meaningful.”

The student athletes played their games that Saturday knowing that there was so much more to the day than the final score. “This fundraising experience was really special and important to me,” said Culbertson. “As a senior, I feel like this was a great cause to support - this will be something I remember forever. Cancer has affected so many lives, including right here in our East community. I also feel this was a great opportunity to bring East and Rustin together towards a common goal.”

Listrani knew the Pink Game was going to be a success from the very beginning. “The students were enthusiastic about it as soon as we started the conversation,” she said. “And I know they feel good about giving back to their community.” And giving back to the community is exactly what they did. More than $1,195 was raised for Unite for HER in total. When the news got to Weldon about the success of East’s efforts, she sent Listrani a special note thanking her for the team’s remarkable dedication and enthusiasm towards the cause. The entire experience made a positive impact on the team, too - something that they were not only grateful for, but proud of as well. “It feels amazing that all of the hard work the team put in to that day paid off,” said Culbertson. “I’m so happy that the funds will go to help people who are fighting for their lives.”